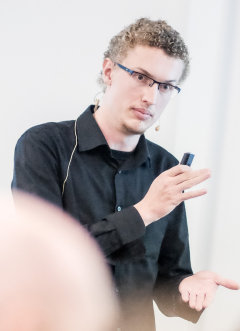 Bio: My name is L. Thomas van Binsbergen and I am a PhD student in Computer Science at Royal Holloway University of London, and an MSc graduate of Utrecht University.

My work revolves around specifying and prototyping programming languages. I would like to draw your attention to the contributions I made to the Utrecht University Attribute Grammar Compiler (UUAGC) in 2014, implementing algorithms for compile-time scheduling of attribute evaluation based on dependency analysis.

In recent years, I have been associated with the PLanCompS project and have developed Haskell tools for defining and executing FunCons: highly reusable and modular components used in the formal specification of programming languages’ semantics. For more information visit http://plancomps.org

Particular aspects of my specialism “Software Languages and their Specification”:

My interests in Computer Science Education: